With the Golden Globes past us and the Baftas and Oscars looming, the award season is in full swing, and prediction buzz has reached fever pitch. As for me, I move between a state of second-guessing who’ll win what and one of “I can see right through this wrestling match of PR agents.”

Yet, the following thought remains constant amidst all my internal battles: even without having seen all five nominees, it’s fairly safe to say that Argentina’s entry, Damián Szifrón’s Wild Tales, will not be winning the Oscar for Best Foreign Film.

On paper, Szifrón’s film has all the cards to succeed. Its stellar ensemble cast features two actors that will be familiar to international audiences: Dario Grandinetti (co-protagonist of Almodóvar’s Talk to Her) and Ricardo Darín, who over the past years has appeared in almost every Latin American movie that made its way outside national borders (just to name a few: XXY, Carancho, The Son of the Bride and the 2010 Oscar winner The Secret in Their Eyes) and is possibly the most recognisable Argentine actor at the moment. It has an even more famous producer, the Almodóvar brothers’ El Deseo, whose long shadow has insured the film gets all the attention it deserves. Also, in the countries where the film was released, it has been doing well both in terms of sales and feedback.

Whilst nailing another Oscar win would firmly place Argentina on the cinema map and acknowledge both the Latin American New Wave and the rise of New Argentine Cinema, it’s quite unlikely that the film will secure the award.

It’s not necessarily a matter of genre, of Wild Tales being a comedy when most foreign film winners are dramas. It’s not even a matter of cultural specificity, for its vitriolic humour has translated quite well across countries. Rather, it has something to do with its anthology format, six episodes that don’t allow viewers to fully get to know and connect with the characters. But it is mostly the way in which these characters – and, by proxy, humanity – are depicted that won’t go down too well with the Academy. Past winners have featured tales of everyday heroism (Life is Beautiful, A Separation), heart-wrenching pain (Amour, The Sea Inside, All About My Mother), or films where even a despicable protagonist is granted a last chance for redemption (from the spy that turns against the Stasi in The Lives of Others to The Great Beauty‘s Jep Gambardella, who finally sheds his ennui and engages once again with life in all its ups and downs). 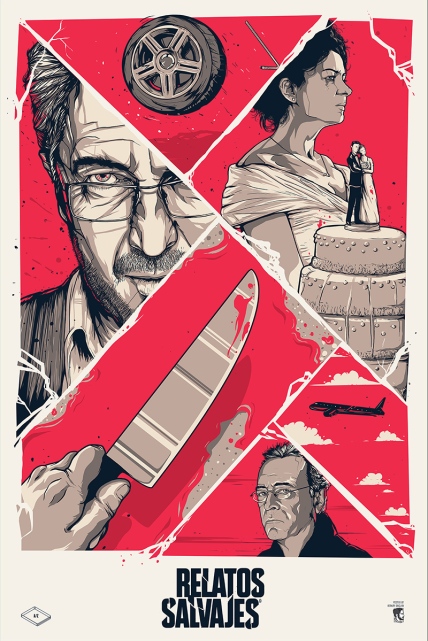 The characters in Wild Tales, on the other hand, have no interest in being redeemed. As the title promises, the film is a descent into unhinged savagery, where all pretenses of formalities, of saving face, of social norms or – if all else fails – of fear of the consequences, are washed away in a stream of blistering wrath and explosive revenge.

No institution, no status symbol, no professional category is left untouched by Szifrón’s scathing critique. The middle class – and everything it holds dear – is especially targeted and exposed in all its neuroses and hypocrisy. But truly, no one’s exempt from Szifron’s desecrating gaze, not even the audience: that we partake in the characters’ fury, that we laugh at brutal murders and rejoice in revenge as if it were a cathartic ritual says as much about mankind as the people on screen do. As the end credits roll, we realise that really, the joke (and the mirror) was on us.

Coming from a country obsessed by psychoanalysis, Wild Tales sees the triumph of the id as it crashes its way past the gates of the socially acceptable. Will the Academy award a film that portrays with rare honesty our much suppressed beastly nature? Quite unlikely. But does a film so ferocious need a legitimising accolade from this most proper, most PC of awarding bodies? Frankly, I don’t (think they) give a damn.