February 8 saw the BAFTAs take place. Never a particularly mind-blowing event, this year’s ceremony felt rather underwhelming, marked as it was by the absence of the main winners, Richard Linklater and Wes Anderson.

On the home front, The Theory of Everything was the overall winner; The Imitation Game, on the other hand, left rightfully empty-handed – proof that hiring what is possibly the most bankable British actor at the moment is not necessarily synonymous with accolades or, for that matter, a good film. Benedict Cumberbatch and his fiancée might have #brokentheinternet, as per this article, but that was probably his biggest achievement that night.

Commenting on outfit choices, the lack of originality from the award presenters and Keira Knightley’s contrite expression was the main thing keeping us awake. However, the evening suddenly took an interesting turn when Mike Leigh walked onstage to receive his Honorary Fellowship award [watch his full acceptance speech here]. 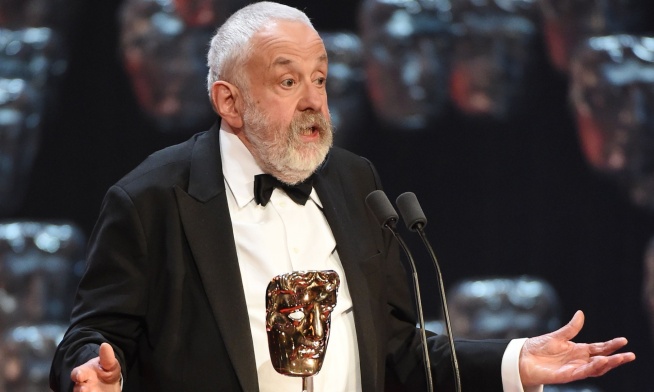 In less than ten minutes, during which he promised not to be rude, Leigh #woneverything. The director reflected on the wonder that is cinema, following it up with an outspoken ode to independent cinema. After expressing gratitude to his supporters, Mike Leigh went on to thank all those who did not back him up, for he would not have allowed his films to be tampered with in any way – no forced casting choices, no changing of the plot, no censorship of any sort.

“Thanks to you too, and may you rot in hell”, he concluded in what was probably the most explosive speech the British Academy has heard in a while. In a year that saw two independent films (Boyhood and The Grand Budapest Hotel) take home most of the awards, I sure hope studios and producers were taking notes – as you can see, I certainly was.