Some of my favourite films from last year – Whiplash, Tu Dors Nicole – were first screened at the 2014 Directors’ Fortnight (or Quinzaine des Réalisateurs, as my francophile self undoubtedly prefers), so it’s no wonder that I was especially looking forward to this year’s edition. As things go, I only managed to see one film – only one! – , but I’m so glad that it was Arnaud Desplechin’s latest, My Golden Years.

Described as a prequel to his 1996 My Sex Life…Or How I Got Into An Argument, the drama takes the form described in its original title, Trois Souvenirs de Ma Jeunesse (literally “three memories from my youth”). Mathieu Amalric, a regular with Desplechin, reprises his role as Paul Dedalus, but largely leaves the scene to Quentin Dolmaire, who plays his younger incarnation. 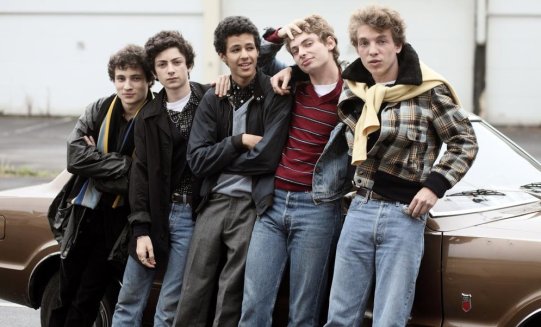 The film starts with Paul’s return to France after many years spent in Tajikistan. Stopped at the border because of an issue with his documents, he is held for questioning, which triggers his memories. He remembers moving in with his great aunt after some awful fights with his mother, and that’s the first chapter. He remembers his adventurous trip to Moscow with his then best friend, and the muted melancholy with which Paul recalls a friendship that has since dissolved is possibly one of the most delicate and moving moments in My Golden Years. More than anything though, he remembers Esther, the third and longest memory in this bittersweet drama.

As beautiful as she is insolent, Esther is so totally out of Paul’s reach that it’s only natural to see them ending up together. Watching their long-distance relationship, romantically sustained by countless letters, brief phone calls and monthly visits, is heart-wrenching, and we truly feel for the couple as they go through ups and downs, separations, crises and the occasional infidelities.

For a film so imbued in melancholy, My Golden Years is surprisingly funny. Esther’s cutting disdain for the other girls is as pungent as it is funny, and the hilarious skirt-dropping scene has quickly become one of the most talked about moments in the film. Paul’s younger brother’s peculiar take on religion is also a constant source of laughter.

My Golden Years is aided by a lively soundtrack and a vivid cinematography, which stop it (and us) from wallowing in nostalgia. On the contrary, the saturated colours, warm light and soft focus that pervades many of its scenes suggest the serenity that only comes once time has glossed over memories, hiding the most painful bits away.

The result is a poetic film about what could have been and what has been instead. Paul Dedalus acknowledges that his best days may be behind him, but seems to be at peace with that, choosing to savour those beautiful memories instead of giving in to self-pity. An almost cathartic journey that will make you smile as you wipe a tiny tear from your eye, it goes to Desplechin’s credit that he manages to achieve that without the slightest attempt at manipulating his audience. I might have not seen the other films in competition, but I know who I’m rooting for tonight. Bravo, et bonne chance. 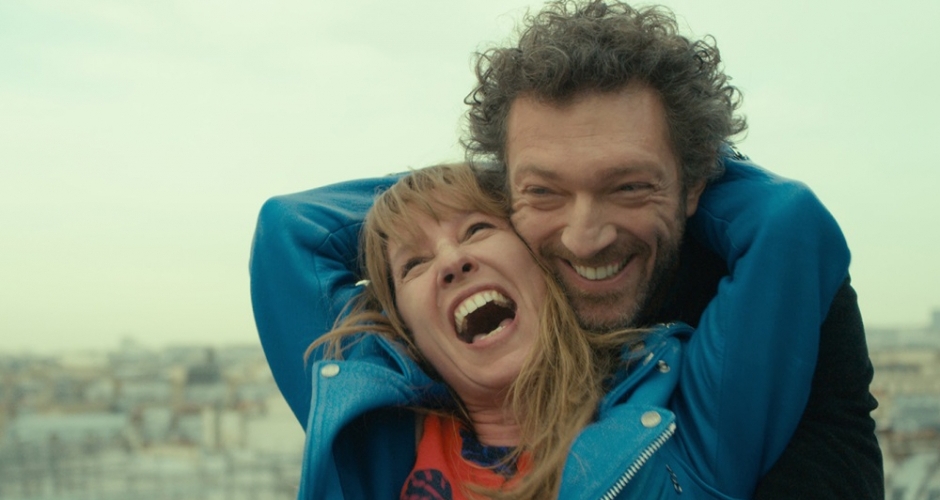 When thinking of Mon Roi (My King), two things come to mind: the first is the title of a novel by Lucia Etxebarria, Love, Prozac And Other Curiosities, the second is With or without you by U2 (and yes, I am aware I might have just lost you there). And yet, it is this two sentences that, especially if combined,  best summarise this film by Maïwenn, a drama starring Emmanuelle Bercot, Vincent Cassel and Louis Garrel that is in competition for the Palme D’Or at Cannes.
Having torn her knee ligament in a skiing accident, Tony (Bercot) is sent to a physiotherapy clinic in order to recover. There, a psychologist suggests that this accident might be an occasion to work on some unresolved issues in her past relationships – an idea backed with bizarre evidence such as the knee being an articulation that only bends backwards (suggesting the need to look back) and a pun that is lost in translation (genou, French for knee, sounds very similar to  je, nous – me, us – hence the focus on her love life).

Whether she is sold on it or not, Tony begins to reflect on her relationship with Georgio (Cassel), reliving all of its ups and downs (“ups and downs” being a major understatement). Maïwenn chooses to chronicle their ardent love story from their first meeting and proceed in a linear way, intercutting the flashbacks with scenes from the present day, which focus on Tony’s recovering process. At the beginning, Tony and Georgio really are the perfect couple – funny, successful and clearly head over heels in love – causing us to become invested in their relationship. This is probably due to My King‘s strongest suit, its cast: Bercot and Cassel share some real on-screen chemistry, and even Louis Garrel, who unsurprisingly plays the part of the impossibly cool, perennially unimpressed guy, later reveals a softer side as Tony’s protective brother. Their powerful performances go from amusing to quite moving, and that’s probably what makes this relatively banal story still compelling to watch.

My King is told entirely from Tony’s point of view, which is understandable, as it is her recollections we are seeing. However, she is almost always presented as the victim, and while it is undeniable that this is often the case, the film is missing some acknowledgement on her side of what she, too, might have done wrong. This seems slightly at odds with the idea that emotional healing can pass through physical recovery, and that she should see the her accident as the occasion to figure out unresolved issues in her past. But then again, the idea that she might be able to heal her emotional wounds in the same way she could recover the use of her knee seems quite shaky. Lasting just over two hours, My King doesn’t really give us the closure we need; on the contrary, the more the film progresses, the more it feels like every flashback is another episode in the seemingly never-ending soap opera that is their life. Will they make up, break up or grow up? The bets are open.​ http://www.youtube.com/watch?v=1gO3qjW0Xzc This review was originally published on Nisimazine 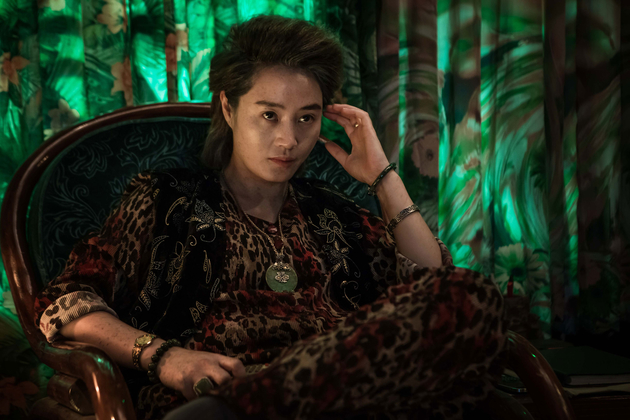 After throwing us in at the deep end, Han takes a step back to 1996, when a newborn is abandoned in the coin locker of a Seoul metro station. Brought up by the homeless people who live there, she is named Il-Young (One-Zero) after the locker in which she was found, number ten.

In 2004, she is kidnapped and taken to Chinatown, where a woman known as Mum is at the head of organ trafficking, ID card forgery and shark loan activities. As merciless as she is aloof, Mum spares people’s lives as long as they are useful to her. This is a lesson Il-Young is quick to learn, and before long, she is running “errands” for Mum.

Coin Locker Girl is an action-packed film without many dull moments. There is nothing boring about its visual appearance either, as the artificial illumination of the many night-time scenes lend it a vivid, almost fluorescent glow.

Its strongest suit, however, is the skilful way in which it mixes genres. For a start, the plot features elements from both pulp/action films and more classic dramas in which characters are faced with life-altering (or life-threatening) decisions. As such, the film becomes accessible, if not enjoyable, even to those not very familiar with gory Korean mob films – as long as they don’t mind witnessing a fair share of blood and graphic violence, that is.

The genre cocktail is also conveyed through the soundtrack: while the images are those you would expect from a pulp/action film, the music is often quite dramatic, especially during crucial scenes, fully conveying the contrasts and inner conflicts that preoccupy the characters. 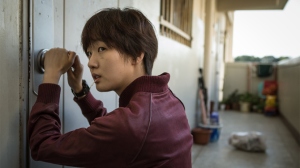 Both Il-Young and Mum are impeccably portrayed, and Kim Hye-soo and Kim Go-eun really manage to convey the twisted bond between a ruthless woman and her protégée respectively. Seen from this angle, the film becomes an exploration of a tainted mother/daughter relationship taken to an extreme, whose final outcome would make even the most experienced shrink shudder.

Behind its bloody façade, Coin Locker Girl hides a powerful tale of love and hatred, but also one of initiation and resilience. For being a first-time director, Han Jun-Hee shows incredible potential.

Under the blossoming cherry trees, two very different people, Sentaro and Tokue, strike an unlikely friendship. He is a disillusioned man who earns a living by running a tiny dorayaki pancakes restaurant, and she is an adorable, slightly batty elderly lady who is determined to get a job there.

For its opening feature, Un Certain Regard chose An, a low-key feature from Cannes regular Naomi Kawase. A melancholic film about loneliness and blessings in disguise, An is an intimate drama that feels unresolved despite its promising beginning.

When the film starts, Sentaro is reluctant to hire Tokue because of her old age, but quickly changes his mind when he tastes the an (the red bean paste that goes into the doriyaki) she made: her recipe is so delicious that it sends the business booming within days. The initial enthusiasm, however, is short lived, for a rumour starts to spread that she might be a leper. This could cause the restaurant to shut down, but customers have been flocking in since Tokue’s arrival. Sentaro knows he has to take a difficult decision, but he’s torn, which makes him slump back into his usual state of torpor and depression.

If Kawase had stopped there, the film would function really well as a study on loneliness and quiet suffering, exploring the fortuitous ties that can link two strangers – and indeed the first half of the film is strong enough to stand on its own. Instead, the film carries on for another hour, with characters and plot progressively losing focus.

While the decision not to dwell on Sentaro’s sadness is for the best, Tokue has an interesting back-story that deserved to be explored a bit further. She was faced with many difficulties during her lifetime, but didn’t let them hold her back nor prevent her from finding beauty in life. Instead, An reduces her to the role of “angel in disguise”, a trick that feels unnecessary.

The cinematography can only do so much to help the film. The soft lighting lends it a gentle, almost rarefied atmosphere, and the recurring images of nature, with which Tokue entertains a constant dialogue, are really idyllic. Focusing on showing rather than telling, An is a delicate exploration on grief and marginalisation that does not give in to pity. Sadly, it also fails to fully engage with these topics, and the absence of a real reflection on the stigmatisation of lepers, ageism or simply loneliness is very much felt.

The final impression is that of a feature that avoids challenging subjects in favour of a cute and forcibly moving story about an old lady and her positive influence in the lives of other people. While that’s nothing wrong per se, An nevertheless feels like a half-baked effort.