When thinking of Mon Roi (My King), two things come to mind: the first is the title of a novel by Lucia Etxebarria, Love, Prozac And Other Curiosities, the second is With or without you by U2 (and yes, I am aware I might have just lost you there). And yet, it is this two sentences that, especially if combined,  best summarise this film by Maïwenn, a drama starring Emmanuelle Bercot, Vincent Cassel and Louis Garrel that is in competition for the Palme D’Or at Cannes.
Having torn her knee ligament in a skiing accident, Tony (Bercot) is sent to a physiotherapy clinic in order to recover. There, a psychologist suggests that this accident might be an occasion to work on some unresolved issues in her past relationships – an idea backed with bizarre evidence such as the knee being an articulation that only bends backwards (suggesting the need to look back) and a pun that is lost in translation (genou, French for knee, sounds very similar to  je, nous – me, us – hence the focus on her love life).

Whether she is sold on it or not, Tony begins to reflect on her relationship with Georgio (Cassel), reliving all of its ups and downs (“ups and downs” being a major understatement). Maïwenn chooses to chronicle their ardent love story from their first meeting and proceed in a linear way, intercutting the flashbacks with scenes from the present day, which focus on Tony’s recovering process. At the beginning, Tony and Georgio really are the perfect couple – funny, successful and clearly head over heels in love – causing us to become invested in their relationship. This is probably due to My King‘s strongest suit, its cast: Bercot and Cassel share some real on-screen chemistry, and even Louis Garrel, who unsurprisingly plays the part of the impossibly cool, perennially unimpressed guy, later reveals a softer side as Tony’s protective brother. Their powerful performances go from amusing to quite moving, and that’s probably what makes this relatively banal story still compelling to watch. 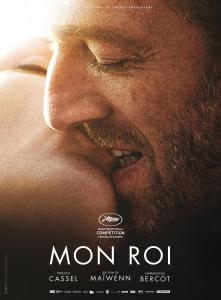 My King is told entirely from Tony’s point of view, which is understandable, as it is her recollections we are seeing. However, she is almost always presented as the victim, and while it is undeniable that this is often the case, the film is missing some acknowledgement on her side of what she, too, might have done wrong. This seems slightly at odds with the idea that emotional healing can pass through physical recovery, and that she should see the her accident as the occasion to figure out unresolved issues in her past. But then again, the idea that she might be able to heal her emotional wounds in the same way she could recover the use of her knee seems quite shaky. Lasting just over two hours, My King doesn’t really give us the closure we need; on the contrary, the more the film progresses, the more it feels like every flashback is another episode in the seemingly never-ending soap opera that is their life. Will they make up, break up or grow up? The bets are open.​ http://www.youtube.com/watch?v=1gO3qjW0Xzc This review was originally published on Nisimazine